A Christmas Carol by Charles Dickens

Another review! I am going to be having "Four Days of Book Reviews". First Dash & Lily's Book of Dares, now this, then tomorrow a new review, and the last day of December another review. Enjoy! (: 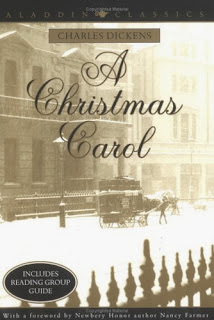 A Christmas Carol is the classic story of an old, bitter man, who, through meetings of past, present, and future spirits, changes his life for the better - just in time for Christmas!

This is a very traditional and heartwarming tale. It was the perfect book for me to read on Christmas Day. That said, it was very easy to forget that this wasn't just another A Christmas Carol retelling. There was nothing original or gripping in the way Dickens wrote it that felt like it was special as compared to other editions. I give him credit for coming up with this wonderful story, but I was a little surprised at how average it seemed to me.

Let's talk about the characters in this story. Because I have seen various editions of this story, none of them were surprise. Scrooge is bitter, Bob Cratchit is kind and devoted, and Fred (Scrooge's nephew) is merry and caring. Everything with the characters were pretty much as expected and reflected on the various movies and plays I have seen. The one thing I did find was that the Ghost of Christmas Past was extremely hard to picture in my head. I still fail to see how he can randomly grow legs... The Ghost of Christmas Yet to Come, however, was written exactly how I saw him.

The writing style was noticeably archaic, as this was written long ago. Because of this, sometimes I had to read closely to pick up on the meaning of the sentence, which I had expected. The one thing I was surprised about, however, was how superfluous some of the story was. It was often bogged down by heavy descriptions which I honestly couldn't make sense of, not because it was old-fashioned, but because I could not decipher was Dickens was trying to say, to be honest. Call me simple-minded, I really don't care.

I seem to have a lot of qualms about the book when you read above, but overall, I still enjoyed it and because three stars means "liked the book", that is the rating I have given it. I would recommend this book to read if you want a classic tale for Christmastime, but I would not recommend reading it any other time of year.

Have a lovely day!
Posted with awesomeness by Danika at 15:23 No comments:

Finally! A real review! *gasps from the crowd* 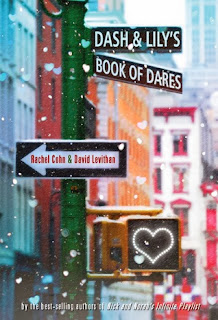 Dash & Lily's Book of Dares tells the story of two teenagers who share an unexplainable connection through one red Moleskine notebook, and the adventures the simple journal sets them on.

The one word I could use to describe this book would be entertaining. I was so caught up in Dash and Lily's story, mainly because of the characters. Dash and Lily both had very distinct voices and narratives, which added interest and made it easier to distinguish the alternating POV's. At first, though I thought they were fun and interesting to read about, I didn't really like either Dash or Lily. I found Lily to be whiny and Dash to be sullen and rude, but I grew to love them. The supporting characters like Langston, Boomer, and particularly Great Aunt Idea were all super fun and hilarious and I just loved them! I also loved the character dynamic and dialogue in this book - it was so funny and entertaining to read!

The plot progression was well done; something was always happening and new characters were introduced at the right times to give the plot a boost. Plus I just love the idea for this book so very much, with the journal being passed between the two characters. However, I was hoping for a few more dares and less scavenger hunt. I feel like that was a missed opportunity that the authors could've jumped on.

Overall, this book is a cute and light read for the holiday season. It really sucks you in to it's cute and fun world and you'll find yourself immersed in Dash and Lily's story. This is a book I would definitely recommend, especially for Christmas.

Have a lovely day!
Posted with awesomeness by Danika at 13:35 2 comments:

Hello! Today I am posting to inform you of a group I am going to participating in. Created by Brianna @ For the Love of Books (follow her - she's awesome!), this club is when you choose any book at all and read it from your bedtime until midnight - hence the name. It sounds super fun and I thought "why not?"

Brianna posts a wrap-up and TBR each night that she participates, but I will just be writing it in the Goodreads group (https://www.goodreads.com/group/show/121725-the-midnight-readers-book-club). If I do a end-of-the-week wrap-up or update, I will include it in that as well.

Feel free to join in, anyone can! Simply join the Goodreads group and post a blog post. Hope to see you there. (:

Have a lovely day!
Posted with awesomeness by Danika at 11:21 No comments:

I literally suck. The last book review I posted was Vampire Academy... and I read that in ... September?  And before that I hardly posted any reviews as well. I also had a review I was going to do for Liesl and Po that's been sitting around since October. Have I mentioned that I suck? Anyways, in early January I will be posting some of my goals and I will expand on what I'm going to do to fix this problem. But for now, I'm going to be promising four reviews: Dash and Lily's Book of Dares by Rachel Cohn and David Levithan, A Christmas Carol by Charles Dickens, Partials by Dan Wells (when I finish it) and *hides* Liesl and Po by Lauren Oliver.

I also have several tags planned. I apologize sincerely to Brianna @ For the Love of Books and Kalindee @ They Start Revolutions (go and follow them now - them and their blogs are fantastic!) for neglecting to complete either tag. The moment for Bookish Halloween Tag has, sadly, long passed, but I am looking forward to posting the Book Scavenger Hunt tag (check it out on Kalindee's blog). I also have two other tags planned so keep a watch for those.

Finally, what have I been reading? Now that I'm on break, I have so much more time to read. Lately I have been really slowing down with my reading and I don't like it! I have so many books to read, so it's great to get into the swing of things again. So far in December I have read Catching Fire by Suzanne Collins (re-read), The Snow Queen by Hans Christian Anderson, Dash and Lily's Book of Dares by Rachel Cohn and David Levithan, Harry Potter and the Philosopher's Stone by J.K. Rowling (re-read), and A Christmas Carol by Charles Dickens. I am actually super excited about this! There is still almost a week left of my favourite month of the year, so I am hoping to finish another three books. Sounds ambitious, but I don't think it'll be too bad considering I'm on break.

Currently I am reading Partials by Dan Wells, my epic rec for... *hides again* November. At first, I was really liking everything about the story, only I couldn't get into it AT ALL. I was practically skimming (which I rarely ever do), and it was a struggle to make it through a few pages. One chapter was a celebration! However, I read a chapter of Harry Potter and the Chamber of Secrets, then resumed reading Partials, hoping to motivate myself by rewarding myself with HP when I read so much of Partials (thanks a lot Brianna). But then I read a chapter more and it started getting super action-filled and awesome! So now I'm excited. (:

The books I would like to finish for the rest of December include Partials by Dan Wells, Harry Potter and the Chamber of Secrets by J.K. Rowling and finally, my epic rec for December, The Giver by Lois Lowry. I actually have hope to finish these by December. And if I finish two of these, my goal of 70 books read in 2013 will be met!! And guess what? I'm FINALLY back on track!

This was a very long and overdue update - but I have a lot of catching up to do! Keep updated because I am going to try to post more often in the coming weeks. What are you reading or doing on your break? And I hope everyone had a very merry Christmas!
Posted with awesomeness by Danika at 13:20 2 comments: